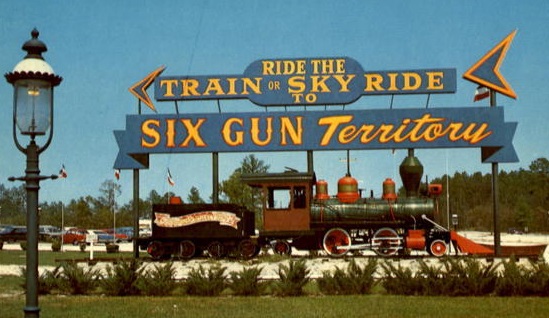 When I was a kid we did a couple of weekend trips an hour or so north of DeLand to Silver Springs, FL, and at the time there were two major attractions to go to: Silver Springs itself, and Six Gun Territory.  Silver Springs is still there, sort of (the State of Florida took it over a few years ago and its nothing like it was back in its hey-day, which I saw only the last glimmer of back then), but Six Gun Territory made its trip to the undertakers back in 1984, and now on the site sits a shopping center which had the nerve to call itself Six Gun Plaza!

But now you can relive (sort of) some of the experience not far from Six Gun Plaza (about 25 miles to be exact) over in Williston, FL at the Kirby Family Farm.  Every year (this is the second) they host the Six Gun Territory Reunion Weekend, in which folks that used to work at SGT come back, suit-up, and relive the old times (both circa 1963-84 and 1863-84).  The Kirby’s have a very impressive setup for a small family operations: the largest private railroad in Florida, the original Train Depot from SGT, the making of their own Wild West Town (which wasn’t really ready but then I understand they had extensive damage from Hurricane Hermine last weekend, so it’s a wonder they had any of it ready), something called a Super Bus (which is a school bus on steroids), and my favorite, tons of old amusement park and midway rides (most in parts and pieces laying around the permitter, but still you can tell the Kirby’s have ambition.

Outside of the train one of the coolest things they have is a few of the gondolas from the old SGT Skyride itself! 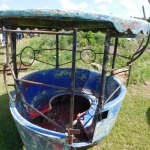 We did the train ride and sure enough, right after we turned the bend and was out of site of the main area there was a hold-up and gun fight just like they used to do.  Many of the actors were original SGT folks as well, so not quite as dramatic as it would have been 40 years ago, but it was still a hoot (an adjective which I think is more than appropriate to describe the entire endeavor!)   On the far side of the ride we saw the Jalopy ride (not unlike one that used to be at Disneyland) and also the newest train engine, this one from Opryland. 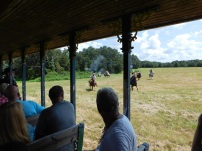 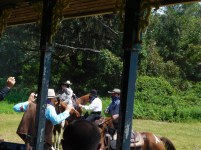 As for the amusement park rides, my feeling is this is the place old rides go to die, or perhaps attempt to get a second life.  One can image the Kirby’s turning this into what amounts to an amusement ride museum at some point, and that would be awesome if they could pull that off. 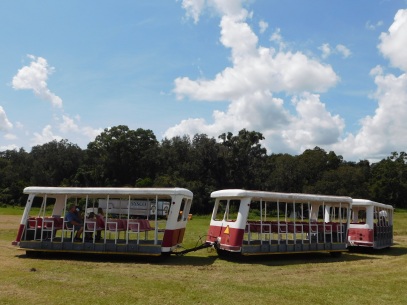 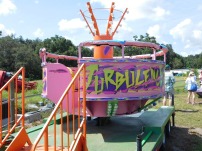 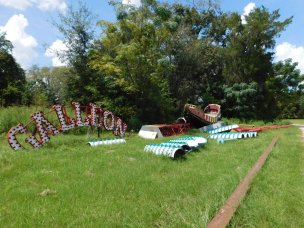 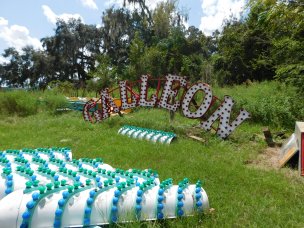 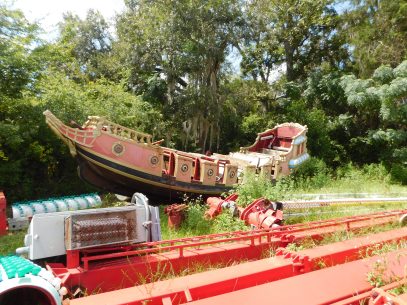 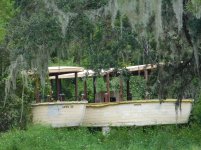 However, if I’m being totally honest if I have one critical point to make it is that it feels like they are currently lacking a focus on what they want Kirby Farms to be.  It is a non-profit educational facility, and they do focus I believe on railroad and old Flordia themes for that, but with all the rides laying around I’m not sure how those fit in (don’t get me wrong, lets give them a few years, or even decades to figure this out!).  Also, I understand they do special Christmas, Halloween and Easter weekends, however the Lost Railroad Halloween themed weekend seems to be a bit terrifying and if so doesn’t really fit into the family themes of the rest of the year (a forest infested with zombie clowns? that could be the most terrifying thing I’ve every heard).  It is promoted as a PG-13 experience but I don’t see why they feel they have to compete with Universal Halloween Horror Nights, although with shows like The Walking Dead and Stranger Things being such a hit I guess they have to go with the flow sometimes.

In any case, aside from my two critical points, The Kirby Family Farm and the Six Gun Territory Reunion Weekend both are wonderful things to experience, and you should mark your calendars for their next big shin dig.